2015 will see adidas release a new version of the ZX Flux which loses the laces to make way for two elastic straps.

We will no doubt be introduced to more colourways this year, but here’s a glimpse at the first two versions we’ve seen. The first is an all-black version constructed in a combination of suede and mesh with a matt finished heel cage. The second is a much more colourful affair finished entirely in mesh. The aqua and yellow will seem somewhat familiar to those who know their ZX 8000s: the addition of red to the mix creates a completely new look, which is only furthered by the “I WANT/I CAN” graphics written across the two straps.

If you like the ADIDAS ZX FLUX SLIP-ON then we suggest you check out the selection available now at OVERKILL via the banner below. 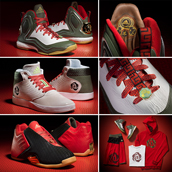 ADIDAS BASKETBALL - YEAR OF THE GOAT