The STAN SMITH looks to be one of the main shoes of choice for ADIDAS ORIGINALS this year and now they get a luxury makeover from the Japanese brand, WHITE MOUNTAINEERING.

White Mountaineering is well known for its technical and clean designs with sometimes unorthodox material choices, which is exactly what we can see on their three colourways of the STAN SMITH. The uppers see the more typical leather application replaced with premium suede and nubuck, in a choice of grey or navy and a white patent leather. There’s a nice contrasting nubuck panel on the heel, featuring a subtle geometric pattern, in either dark grey or off-white. All three pairs are finished off with white laces and soles for a nice clean look and the final little detail of the WHITE MOUNTAINEERING logo embossed on the lateral side at the heel.

To learn more about this release and other potential future collaborations, the team over at Highsnobiety sat down with Yosuke Aizawam, the creative director of WHITE MOUNTAINEERING. HS: To begin, how did the collaboration come about?

About five years ago adidas Originals suggested that we might be able to do something but it was never realized. It took five years for this to actually happen.

HS: Is there any particular reason why it took so long?

We basically were involved in too many projects to find the time to focus properly on such a proposal. It wasn’t a bad thing, because during this interval we learned a lot from our other collaborations. Now was the ideal time to start working together.

HS: Do you remember the first time you encountered adidas?

The first shoes that I saw from adidas were Stan Smiths and Superstars when I was in elementary school or junior high school. I saw older kids wearing them. After a while I saw the Beastie Boys wearing the Campus. These were the classic models that I first discovered.

HS: I’m curious about your take on adidas in Japan. In the U.S. they’re associated with hip hop while in Europe it’s mostly football.

In Japan it was also first introduced as a brand for football shoes. It was only with the introduction of hip-hop culture that they discovered that adidas could also be fashionable.

HS: How did you end up working on the Stan Smith?

As I mentioned, Stan Smith was the first adidas shoe that I encountered and we’re planning a long-term collaboration, so this seemed like the most suitable starting point for our relationship. We can build off of this. HS: How did you approach the reworking of the Stan Smith? You’re well known for using more technical materials, did you start with those, or perhaps the silhouette?

I wanted to focus on the basics since it is our first collaboration. Instead of making drastic changes to the shoe, I wanted to make it comfortable. Because I personally only wear white, grey, navy and black, those are the colors I used for the colorways. I didn’t want to do too much with them.

HS: How did you approach designing just the three shoes as opposed to a full collection?

The choice of shoes came from my personal relationship to the Stan Smith, Superstar and Campus. To me, those are the three iconic adidas sneakers. As I said, this is the starting point. adidas is promoting the Stan Smith at the moment anyway, so that was a happy coincidence.

HS: You first got into fashion when your father would hand you down clothing for camping or exploring. Do you take a nostalgic, family-oriented approach to designing clothes? What’s your personal relationship to fashion?

Instead of being nostalgic – the Stan Smith originally came out in the ’70s which is my parents era – and trying to recreate that feeling in the present, I wanted to embrace the challenge of bringing them into the 21st century. I want to update the classics, not wallow in the past. HS: You’ve been doing outerwear as fashion for some time now and it’s just starting to become more popular in mainstream fashion. What are your thoughts on fashion’s acceptance of technical outerwear?

I find men’s fashion very different from women’s. Women’s clothing doesn’t consider functionality as much – it has a lot to do with specific looks. Personally, I like to snowboard and when I snowboard I want to look good. Men have a different attachment to functionality, and I think that more men are realising that they like products most when they embody both qualities.

HS: Adidas is quite a storied company. Did you have a chance to look through the archives and see what other pieces you might be interested in reworking?

I’ve been to the archive room. I think it applies to all sportswear companies, but in the ’80s and ’90s they tried some pretty outrageous designs. After that, they focused on more technical designs. adidas is no exception and among the crazy stuff I saw in the archive, I found some very unique pieces. There are no particular ones that spring to mind but those are the kinds of pieces I want to work on.

An example: The Stan Smith is a timeless ’70s shoe, while the sneakers from the ’80s and ’90s might look out of place today. I want to challenge that and rework those designs for today.

HS: What about newer models like the ZX Flux? There are numerous possibilities with the upper, like new materials.

I have already started working on something like that with newer technology. That component of our collaboration will hit the market very soon. My show in Paris showcases the next set of adidas shoes.

HS: Do you feel like there is a difference between presenting in Europe versus Japan?

We’re not going to make it any different just because it is in Paris. This is what we would do in Japan. We want to make sure that people can come in contact with the clothes.

HS: Over the past few years,adidas has had many big-name collaborations – Raf Simons, Rick Owens, Kanye. Do you think it’s difficult for adidas to maintain their own identity with so many other parties involved?

Of course they have their difficulties finding common ground but they have strong character, and adidas has the experience from working with partners like Yohji Yamamoto, Raf Simons, Rick Owens and Pharrell Williams and most recently Kanye West. Based on those experiences, we will succeed at working something out with them.

All three colourways of the ADIDAS ORIGINALS X WHITE MOUNTAINEERING STAN SMITH are scheduled to drop starting on SATURDAY 21 MARCH. Find all the info via the link-through below. 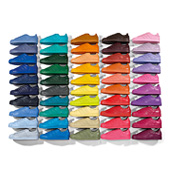 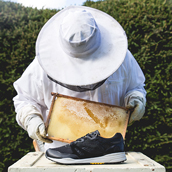