When it was first released in 1989, the ZX 8000 shoe became a style staple that crossed a wide range of style boundaries – thriving throughout the evolution of UK sub-cultures. Today, adidas Originals celebrates the launch of ZX FLUX, showcasing a retrospective of British underground music movements updated with the latest ZX offering: ZX DNA in its simplest form. New technology has kept the ZX at the forefront of sports footwear, but the the style and aesthetics have meant it’s become a street icon that means something to a wide range of people.

Check out Gavin Watson’s images below, acquaint yourself with the amazing ZX FLUX series and immerse yourself in the music! 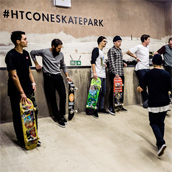 SIDEWALK AND KINGPIN AT THE HTC ONE SKATEPARK, SELFRIDGES, LONDON