The 2015 All-Star Weekend was already looking to be a big one with regard to shoe releases and now another silhouette is added to the list in the form of the NIKE AIR JORDAN 10 RETRO – BULLS OVER BROADWAY.

The last time the NBA All-Star Game was held in New York was 17 years ago and it was the last time Michael Jordan would don the red of the Chicago Bulls in an NBA All-Star Game. With the game returning to the Big Apple for 2015, it seemed only right to bring out a shoe that would be a nod to the 1998 game and the result is the BULLS OVER BROADWAY colourway. Unsurprisingly, the upper is swathed in red full-grain leather, with black used to break up the red sections by the laces and on the tongue. The sole is finished in grey, with red and black speckling tying it nicely to the upper.

The NIKE AIR JORDAN 10 RETRO – BULLS OVER BROADWAY is going to drop on SATURDAY 14 FEBRUARY and will be available via our RELEASE PAGE which you can link to using the banner below. 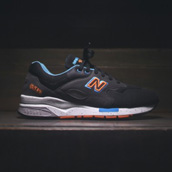