As of yet, there isn’t a great deal of information about the ADIDAS YEEZY BOOST LOW. They made an appearance during the recent runway show in NYC, where the YEEZY SEASON 1 collection was debuted: you can read our full report HERE.

These low-cut versions utilise a variation of the BOOST sole unit, which sits below a very simple, almost no-sew upper. There looks to be two colourways for the first release, with an unusual camouflage application being used on the upper section – one in off-white and grey and the other in black and grey.

We have a few pictures taken from the runway show to make up this ADIDAS YEEZY BOOST LOW – A FIRST LOOK: keep checking back with us as we’ll have the confirmed release and stockist information up in plenty of time ahead of the drop, which is currently set for 27 JUNE 2015. Hold tight! 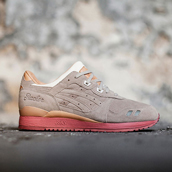