The pack, named after the month of its release, features nylon uppers with three very different prints. The first resembles an out-of-focus photo of lots of colourful lights on a dark night, with accents of blue on the three stripes, heel cage and midsole. The second pair takes on a monotone, ‘dazzle camo’ style pattern across the upper, with hits of purple to add some pop. The last pair’s design is a little less obvious – to us, it looks like the print resembles yellow and green light being refracted at different angles, with hits of mint blue to add some more colour. All three pairs are rounded off with white soles, which allow the uppers to remain the centre of attention.

The ADIDAS ORIGINALS ZX FLUX MARCH PRINT PACK is scheduled to drop on SUNDAY 15 MARCH and will be available via our RELEASE PAGE. 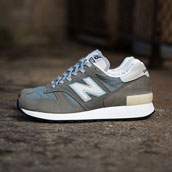