Ahead of the second coming of the SPEZIAL exhibition – this time taking place, more appropriately, in Manchester – and the accompanying capsule collection, ADIDAS held a screening of ‘Sole Searching in South America’ at its new flagship London store.

Whether you consider yourself an adidas aficionado or not, it’s impossible to watch the film and not share in the palpable excitement of collectors Robert Brooks, Ian Brown, Gary Aspden and Mike Chetcuti as they trawl through Carlos Ruiz’ stacked shelves of vintage adidas products from bygone years. As the feature film ended we were pleasantly surprised to be treated to an extra six minutes of footage which saw Aspden run us through the meticulously-designed Spezial footwear and apparel range. Each piece uses an archive adidas design as a starting point, before being reengineered with modern functionality and updated aesthetics, as well as plenty of references to casuals culture.

Attendance was exceptional on the evening, with ATM (adidas trainers marketplace) out in force and most eager to put their questions to Aspden, Chetcuti and Brooksy – despite repeated requests the exact location of this fabled store went undivulged. Something tells us that may not be the case for too much longer!

Many thanks be to Gary, Mike, Brooksy and all at adidas for their hospitality on the night. We look forward to checking out the Spezial exhibition, which takes place from FRIDAY 24 OCTOBER until SUNDAY 2 NOVEMBER. 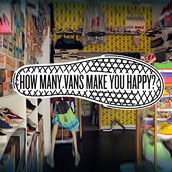 HUCK PRESENTS... HOW MANY VANS MAKE YOU HAPPY?
Previous 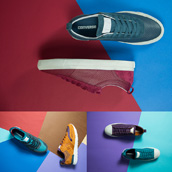