It’s safe to say that so far, ADIDAS has been the brand of 2014. Unless you’ve been living under an Ugg boot for the last 6 months, you will have seen them bring back some cult classics from the EQT line, refresh the mighty Stan Smith, and then blow everyone’s minds with the reinventive genius of the ZX Flux. And, of course, ink a shoe deal with Kanye West. Yup, big things are happening for the Trefoil, and we’re on to the next one – the ADIDAS ADIZERO PRIME BOOST.

Adi’s fight with Nike over who first developed knitted running shoes is an ongoing saga involving patent attorneys and courtrooms, so we’re not paying much attention to it – instead we’re focussing on the shoes. Nike definitely had the early advantage with Flyknit, which appealed to both the actual runners and the style-conscious, and the product range has steadily expanded to cover all shapes, sizes and functions. As big fans of the knit approach we’ve been eagerly waiting for Adi to strike back with an expanded Primeknit range – and here it comes, making first appearances on both retro reworks and some new school runners.

Next up to drop is the Adizero Prime Boost – as the name suggests it’s a mash-up of Adidas’s current tech, featuring a Primeknit upper on an Adidas Boost midsole, with lightweight Adizero construction. Not enough for you? Throw in a Torsion system, rubber outsole by Continental and a ZX style heel counter too – and what you get is a veritable Voltron of Adidas’s tech parts bin!

Despite the crazy amount of innovations crammed into the shoe Adidas have managed to stop the Primeboost looking too cluttered, keeping the same futuristic knitted ZX vibe that the (very very) limited edition Primeknit Pure Boost had, but beefing it up for more serious athletic use. The end result is a shoe that’s stable, super lightweight and ridiculously comfy, but that also has a great silhouette for street wear, and plenty of scope for wild colour blocking and knitted neon madness. The eye-bursting orange, black and white combo seen on this first drop works to show off the different textures of the upper and highlight the ZX-ness of the heel section, whilst also making those classic three stripes prominent enough to let everyone know what you’re wearing.

The infamous ‘tech wars’ of the 90’s may now be footwear folklore, but on current form Adidas are set to resume hostilities – and more power to them! The ADIDAS ADIZERO PRIME BOOST is available now, via the link-through below. 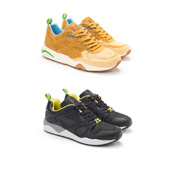 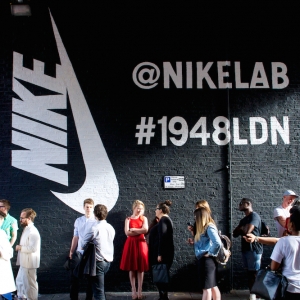